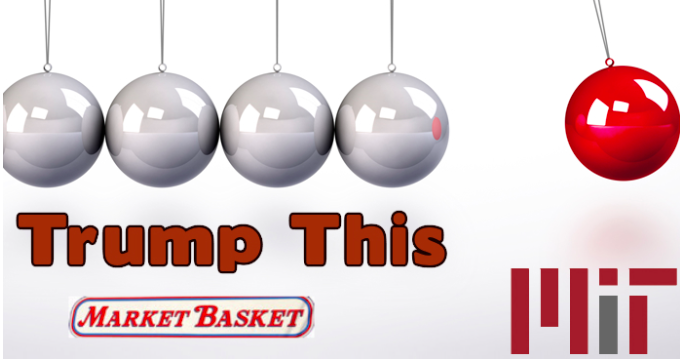 Did I Put All My Eggs in One Market Basket?

It is day #18 of the largest supermarket war in history. This is what we have learned in the past 18 days.

When someone they are loyal to gets a raw deal (who doesn’t remember a Rocky movie and yes everyone loved Sally Fields in Norma Rae.)

Arthur T. Demoulas is under fire as he was removed as CEO of the 46 billion dollar industry by his cousins who own the majority of vote. It started in Lowell, Massachusetts where his father founded the store selling fresh lamb. Upon the death of the grandfather, the chain was split to Arthur T. and his cousin Arthur S. Together they built the business to the 147th small successful business chain in the Fortune 500 list. Yes, 46 billion. Twenty five thousand employees are striking on their own. They never had a union But Arthur T. as he is fondly known , has raised his workers to be like family. The Boston Globe, The Massachusetts TV stations and the entire state of New Hampshire have carried this story daily in the headlines.

You will be spared the detailed information about the family feud: the longest running lawsuits in Massachusetts’s history, you can read it for yourself @m.supermarketnews.com/retail-financial/timeline-brief-history-demoulas-dispute.

Former shoppers at the chain have refused to enter the Market Basket stores (72 in number) in Massachusetts and New Hampshire. I have interviewed many employees and shoppers in other stores. I believe I am not supposed to name them so I can call them the big WM, the lesser H and the national chain S. We have some links at the end of this rather long blog in case you are REALLY committed to growing your particular business, or if you would like lessons on how to ruin a 46 billion dollar industry in one decision.

I truly believe that this case history will be a study in every MBA program from now on in the college of your choice. Another historical event.

One would think that the alternate food chains would lower their prices and accumulate new faithful shoppers but alas, they hiked prices and are giving their workers as much overtime as they want.

Threats to the workers of Market Basket have only fueled the shoppers’ tempers and all of us are more committed than ever not to shop until this is settled.

Let us all stand together and do what is right. Please give us your comments & feedback.

And so it begins. MIT hits it first.

If you had gone to the MIT event tomorrow night please let us know by replying here. If you’re a customer please say so and understand that we appreciate your taking the time to attend. It should be an exciting night as the worlds of business and academia feel there is much to learn from our experiences this past year and a half.

I have to wonder about all the things that transpired behind those locked doors involving how many lawyers? None of us will ever know what took place in those closed door meetings. For my conspiracy fans who are skeptical – did the CEO’s of the Demoulas clan plot and plan all this or did it just fall that way?

Read more how thousands contributed $50K to the film.

“Jay B. Childs, director and film maker is putting the final touches on a documentary about the Market Basket story. Child’s broadcasted on New Hampshire Public Radio this morning to discuss the project. He answered many questions including why he is looking for funding via Kick Starter. You can read the transcript of the interview here:

There is a difference between a documentary and a full- blown Hollywood movie. Either way, our own Jay Childs entrepreneur, of JBC Communications of Exeter, New Hampshire made the WMUR TV news two nights ago with the announcement of his biggest venture yet. He has been filming the saga of Market Basket and the DeMoulas family for over a year. He had the foresight to know that this was big. The film is aptly named “Food Fight – Inside The Battle For Market Basket”. When I first heard the name, I laughed at the catchy title. June cannot come fast enough for me to see the film. People from all over donated to Child’s cause to get this project done. Over all, the generosity and sacrifice of everyone involved in the huge controversy is going on the big screen for the entire world to see. Will this chain of events trigger something new in the business world? My guess is yes. Bring your notepads to the film.

I do not know if Artie DeMoulas has a gold toilet, but I do know he has the affection and loyalty of thousands of employees. Now that is a goal setter for 2015.

Setting Goals For The New Year

Is your business dragging? Are sales down? Is your productivity diminishing? Where did your cash…

Leon Leonwood Bean. Not a very fancy name. Do you know who it is? It’s…